What does a $200 power bar get you? Austere VII Series Power Strip/Surge Protector 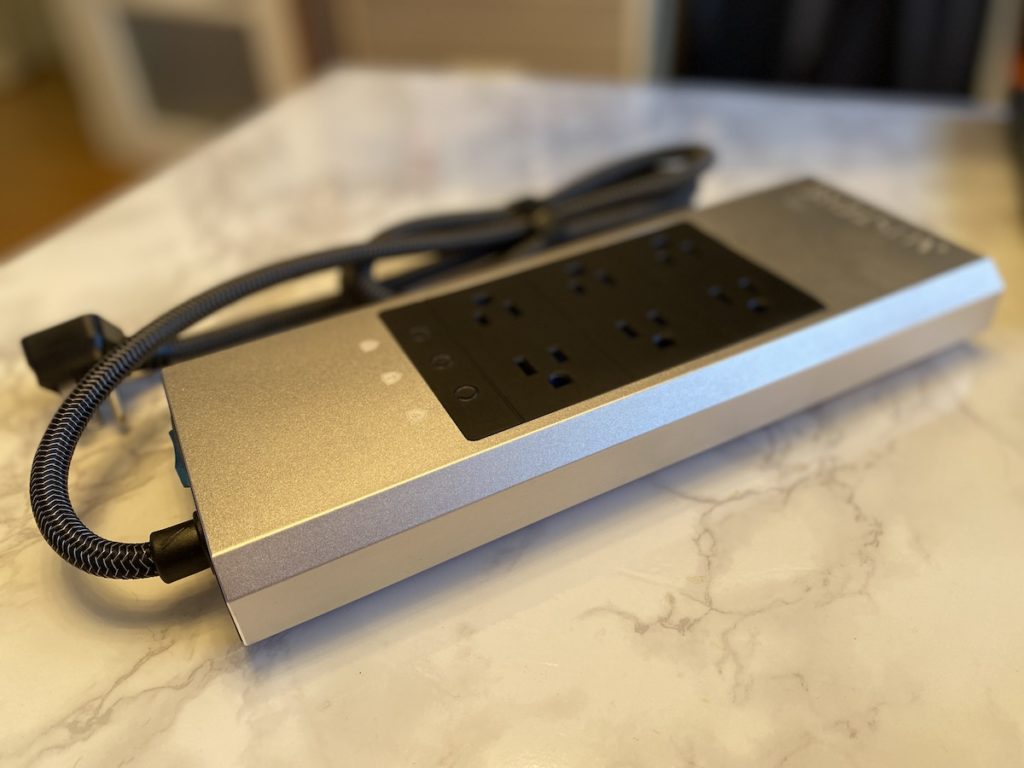 There’s both budget and luxury when it comes to shopping. You can get a $20 bag at The Bay or Amazon, or pay $2000 for a Louis Vuitton. How much you want to spend on everyday items comes down to your preference and your budget. When it comes to some basic electronics and accessories, I’m usually on the cheap side, but when I saw some of the gear from Austere, I was intrigued. Their stuff is really chic and looks a lot nicer than the average, but are you paying for looks, or do you really get more with a pricey accessory like the Austere VII Series power strip and surge protector. I had the opportunity to get my hands on one to see.

Austere Series VII Power is available in two configurations – a six outlet option priced at $179.99 USD (the one I received) and eight outlets for $199.99 USD. Both provide 4,000 Joules of surge protection for your valuable electronic components. 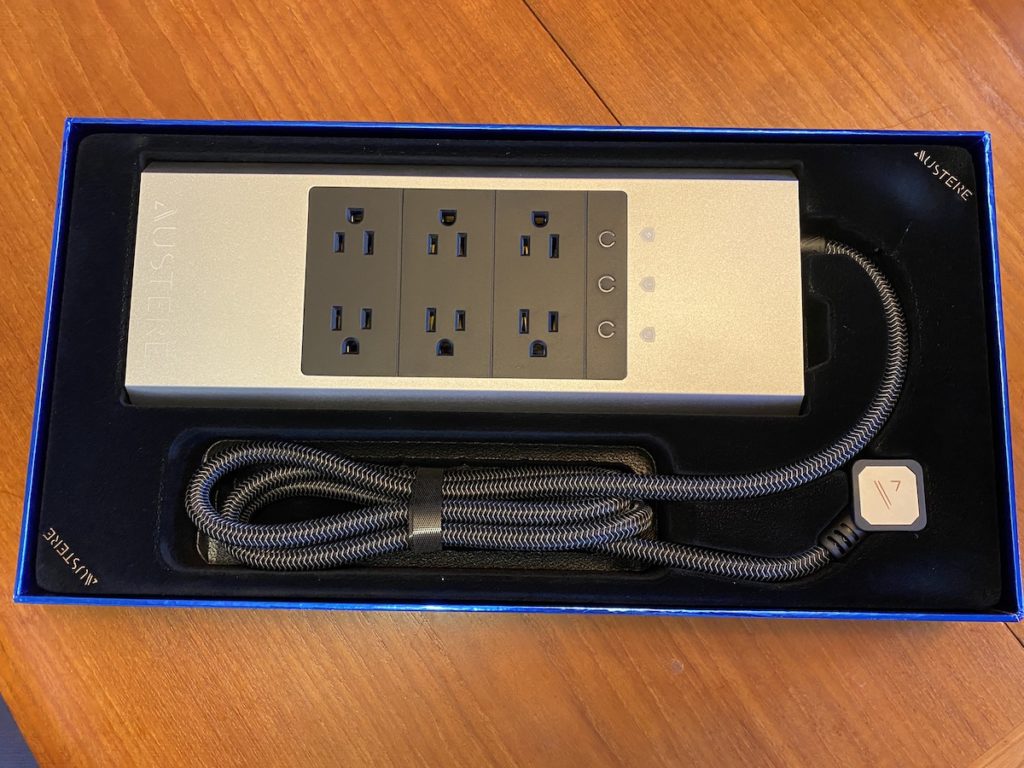 A quick shout out to the packaging this arrived in also. In a luxe embossed box of silver and cobalt, with a plush interior, this package certainly arrives looking like the high end electrical component is says it is. I felt like I was opening jewelry or fine leather goods, not a power bar1

I can say without a doubt that this is the sexiest power bar/surge protector I’ve ever had my hands on. The wide body of the power bar is brushed aluminum so it looks chic and classy.

The thick cord is wrapped in Kevlar (Kevlar!) for durability. Austere calls this WovenArmor and says this combines “uncompromising flexibility and strength with the smallest bend radius available so the product can be used even in the tightest spaces.” The power cord is long and should give you more than enough reach for most applications. 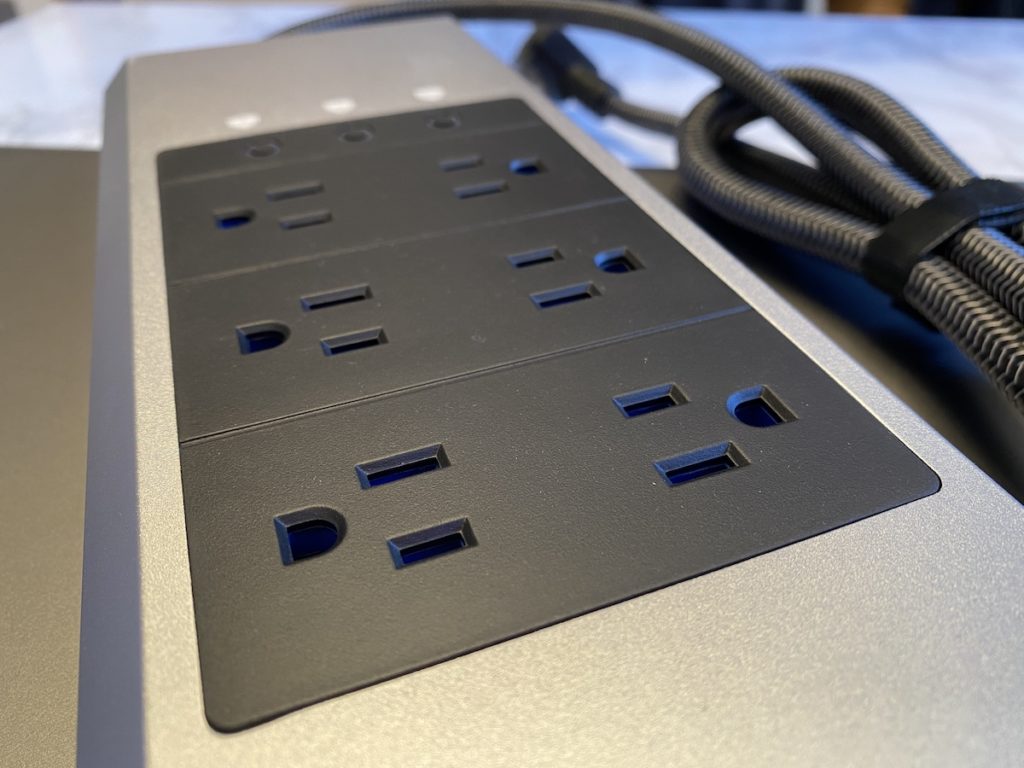 The Austere Series VII Power bar has some serious heft to it, and it feels substantial. It’s also got rubberized feet and two mounting holes if you’d like to attach it to a wall.

In short, the Austere Series VII Power bar feels extremely high quality overall. Handling it next to another cheapie power bar I have, the old one feels light, hollow and like it might blow away. Side by side I sure don’t have the same confidence in the protection abilities of cheapie that I do in the Austere. 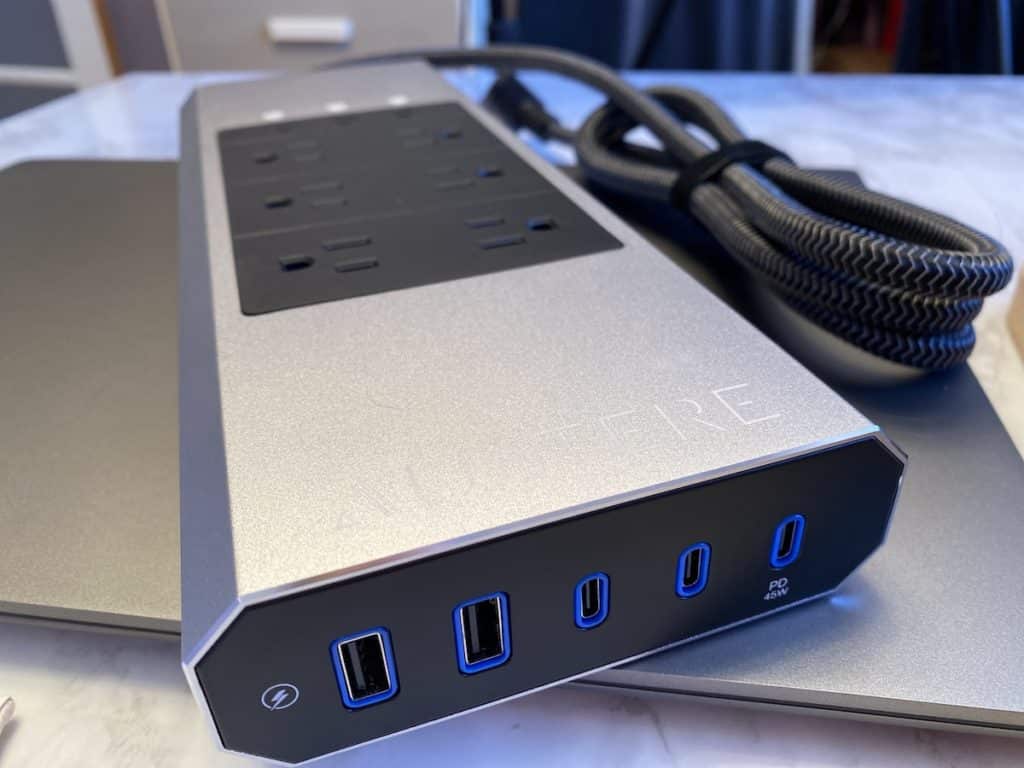 There’s six grounded AC plugs on the top of the power bar, and five more connectors on the end: two USB, two USB-C and a 40W USB-C that allows you to plug in something like a laptop without the need for the big power transformer. (“Unlike other power options, can uniquely charge a laptop through a single USB cable. A powerless MacBook can be charged 90% in about 45 minutes,” says Austere.)

In all, you can plug 11 things into this bar.

If you ask me, with all the real estate on this bar, the plugs could have been spaced out a bit more to prevent wider plugs from overlapping the other outlets. Austere’s marketing says the design allows for “precise spacing between plugs to provide the necessary room so all sources can fit no matter how big the plug,” however some of the new plugs that run sideways (to avoid obstructing typical up-down household outlets) would indeed take up an extra spot unless you place them creatively. 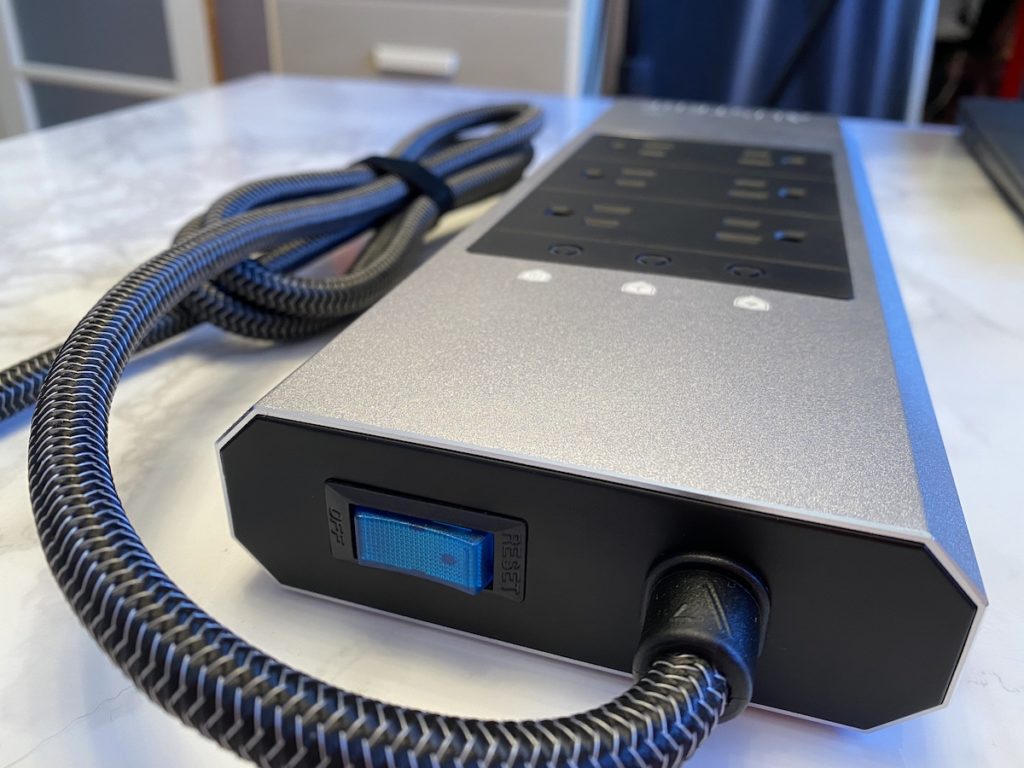 One of the most important aspects of a power bar that’s also a surge protector is that it can save your electronics from frying accidentally. The Austere Series VII Power has three Levels of Surge Protection:
-Flameless MOV for state-of-the-art fire protection.
-Overcurrent Protection includes 15A circuit breaker + LED to defend your equipment from overamping.
-PureFiltration insulates the power signal from external disturbances such as static or noise to deliver video and audio clarity to HDTVs and sound systems.

Your surge protector can expire?!

If you didn’t know, surge protectors wear down and eventually expire and stop being as effective (Google it!). This means they should be replaced every 5-8 years, or when the manufacturers warrant expires.

“Most surge protectors feature a Joule rating on their box – the higher, the better,” according to Austere’s press materials. “A Joule rating tells you how much energy the surge protector can absorb. Every time there is a surge, joules are used up – eventually the device is left without any, leaving your equipment unprotected. The average $25 surge protector has a year’s worth or less of Joules. To make sure you always have the Joules you need, Austere has included an LED Indicator light so customers will know when it needs to be replaced.” 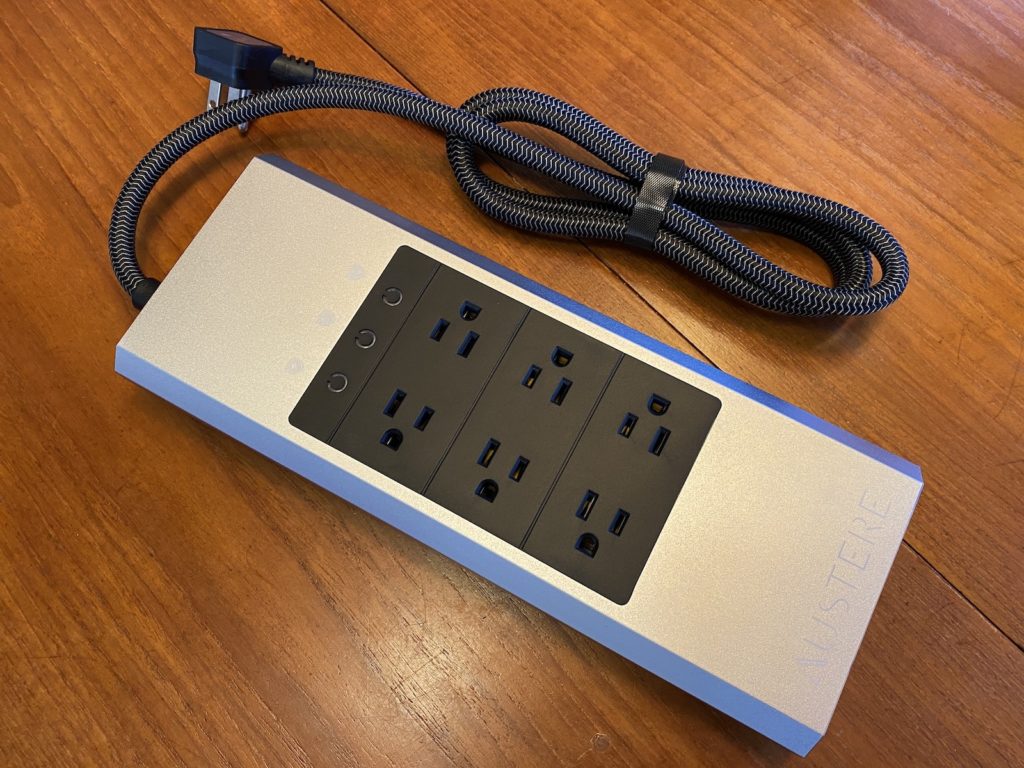 Anyone who’s ever dealt with audio or electrical interference in their components knows how annoying it can be. The culprit can sometimes be your power bar. Austere Series VII Power aims to protect you from that buzzy hum, with Isolated outlet filtration. This feature isolates each pair of outlets to eliminate cross interference from home theater components.

So this bar is not just pretty but functional too.

Finally, a surge protector is only as good as its guarantee. Austere says it stands behind its power products to protect your home for at least five years and offers an unlimited Component Guarantee should any of your products plugged in to Austere power be destroyed by surge or fire within the warranty period. Austere will replace that device regardless of its value for 7 years. 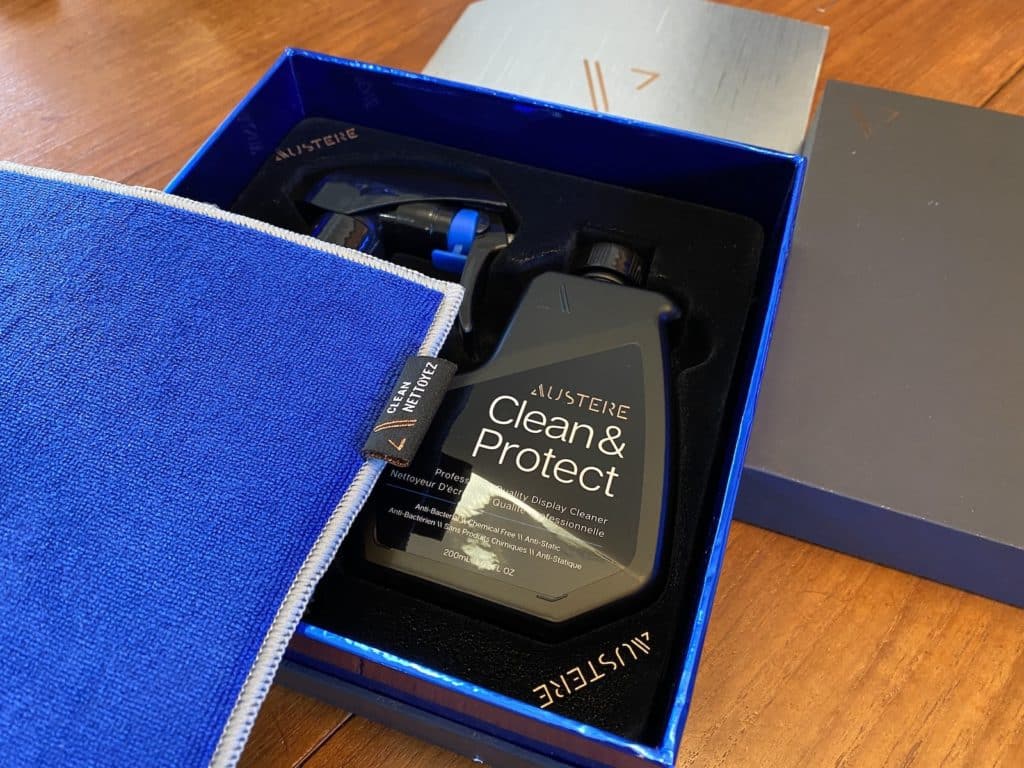 I also received Austere’s Clean & Protect Kit for electronics. The kit consists of a special anti-bacterial, ammonia-free solution that will eradicate germs and eliminate static build-up harmful to your electronics, alongside a thick plush, dual textured microfibre cloth. The applicator sprays the unscented, fine mist evenly and is designed to prevent screen streaks and fingerprints. (It’s lint free, reusable and machine washable).

Also arriving in a sexy silver box, this would be an outstanding gift for Christmas or Father’s day for the home theatre lover in the family. 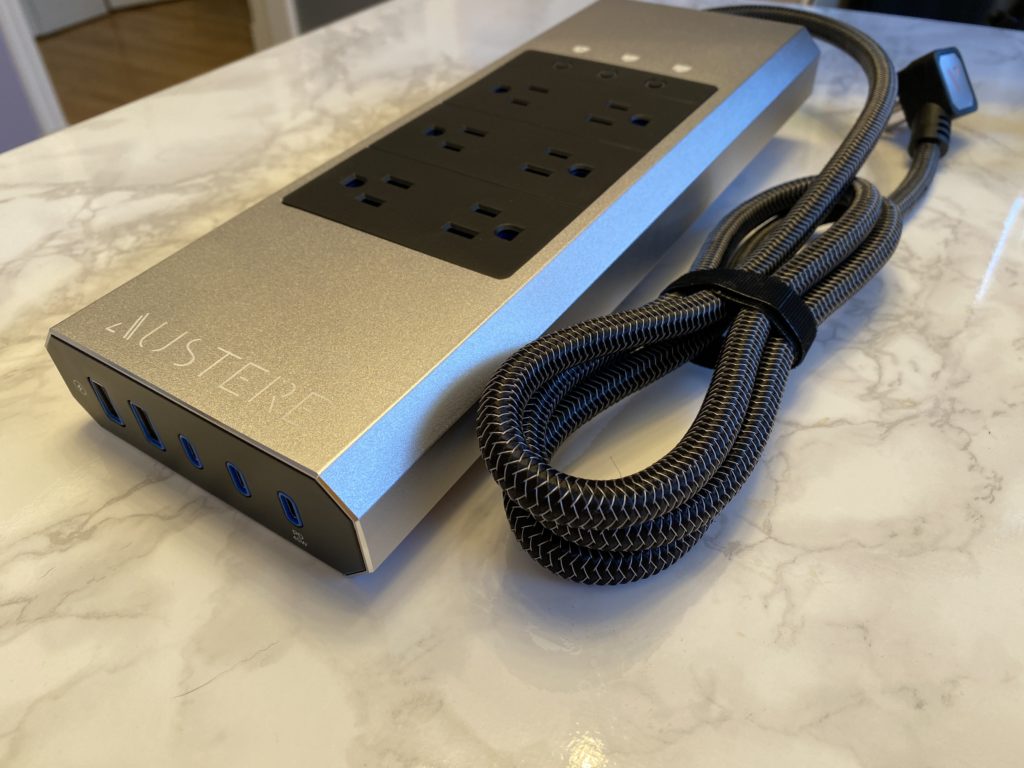 More than just a pretty component for your home office, the Austere Series VII Power is designed to be a helpful insurance policy for your theatre system, or a that new 4K or 8K big screen TV you bought. I do certainly love the looks of it compared to literally any other power bar/surge protector I’ve ever seen.

You’re getting what you pay for with this device. With features like surge protection, electrical interference filtration, and space for 11 devices, it’s the Cadillac of power bars. The packaging is also divine and really makes you feel like you’ve bought something special.

The biggest downside is the price. For the cost of a sound bar, you can add this to your collection… so it’s not going to be for everyone.

Austere Series VII Power is available in two options – a six outlet option priced at $179.99 USD (the one I received) and eight outlets for $199.99 USD.

You can get it from Austere’s website, or from Amazon.