This is a gorgeous piece of electronics, but at the end of the day, it’s a $200 surge protector.

The Austere VII Series surge projector is a radical departure from the norm. Its competitors are invariably ugly things, typically fabricated from plastic with little thought afforded to industrial design beyond how many plugs they can accommodate. Clad in brushed aluminum with polished beveled edges, and a power cord wrapped in luxurious braided fabric, Austere’s device is so pretty you’ll be tempted to leave it in plain view—until you plug things into its eight outlets, that is. Then you’ll hide it away just like any other surge protector.

This review is part of our coverage of surge protectors. Click that link to take a deeper dive into the topic and find reviews of competing products.

What do you get for all that cash? In addition to being beautiful to look at, the Austere VII Series provides over-current protection via an onboard 15-amp circuit breaker, EMI and RFI filtration that insulates the power signal from interference that can manifest itself as noise in your audio system and visual distortion in your video components, and outlets that are electronically isolated from each other. Austere says it uses “flameless” MOVs that won’t catch fire when they can no longer absorb voltage above the surge protector’s clamping level. 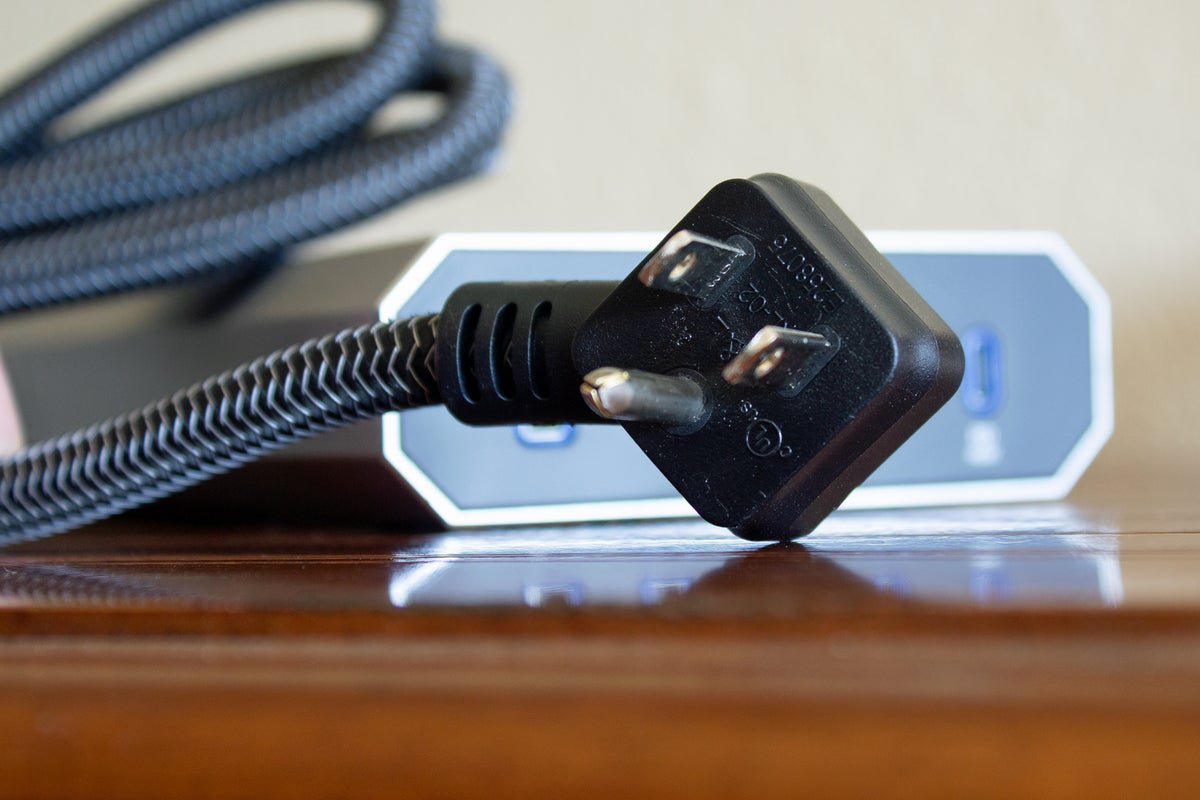 The Austere VII Series can also provide power to USB devices. On the end opposite its own power cord, you’ll find two USB Type A charging ports, two USB-C charging ports, and one USB-C PD charging port delivering up to 45 watts. Ultimately, your device will determine how much power it will accept, however; the Google Pixel 2 XL smartphone that I use, for instance, will only draw 18 watts regardless of how much power the charger can deliver. A newer tablet or a laptop, on the other hand, could suck down all that juice—which means you could leave its power adapter in your backpack, so you don’t need to remember to unplug and pack it every time you hit the road. 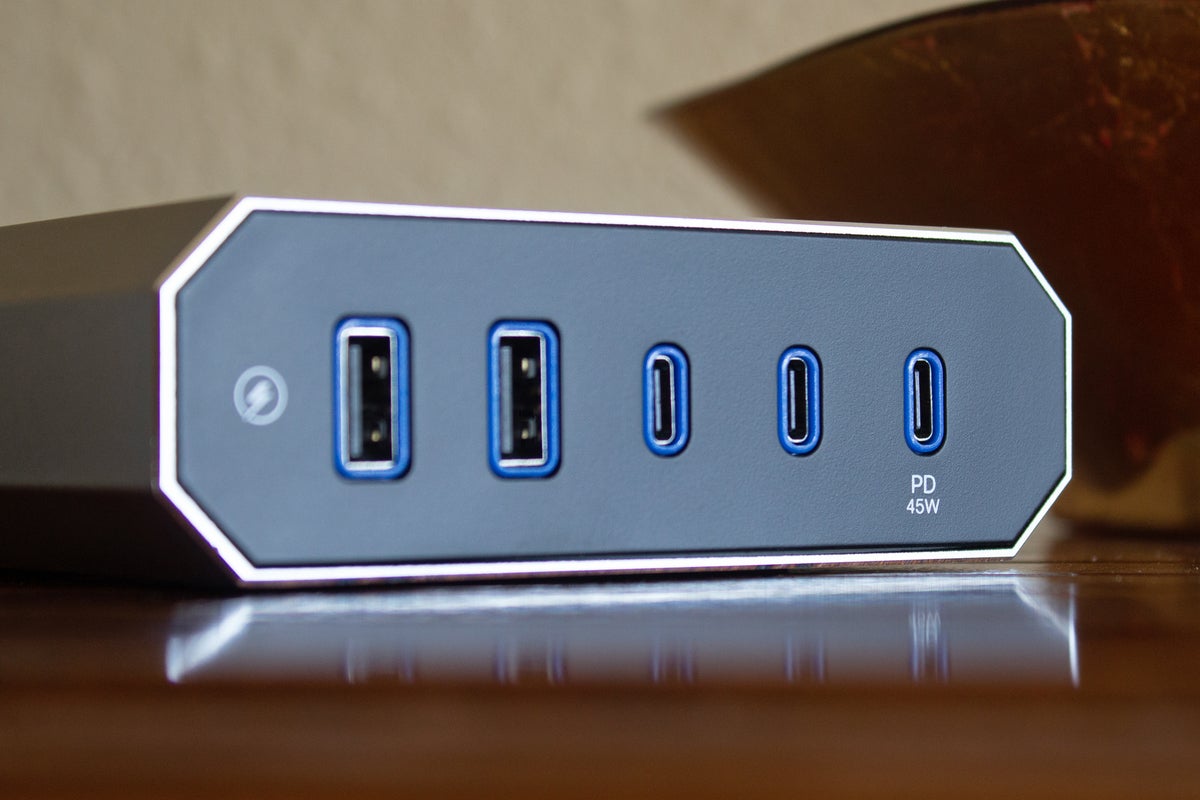 Three semi-circular blue LEDs inform you of the Austere VII Series’ status: The first indicates that the strip is powered on, the second lets you know that the circuit the strip is connected to is properly grounded, and the third lets you know that the MOVs are intact and providing protection from power surges. Unlike some surge protectors, the Austere VII Series will continue to provide power even when its MOVs have been consumed and it can no longer protect the devices plugged into it. If you buy one, remember to check that third LED from time to time to make sure your connected devices remain protected. Austere recommends replacing the device after five years, but that might not be necessary if your utility provides steady power. Just keep an eye on that LED.

The five-foot power cord attached to the Austere VII Series is terminated in a plug with a 45-degree angle, so that it won’t block an adjacent outlet. The cable itself is wrapped in an attractive braided fabric, but more importantly, the cable is exceedingly flexible and can tolerate extreme bends without kinking. Two rubber strips on the back of the surge protector will prevent it from marring the surface it’s resting on, but it has a relatively large footprint, measuring about 5 inches wide by 13 inches long. You could stand it edgewise to save room, but this might scratch the strip or the surface it’s on. Two keyholes are on the back should you decide to mount it to a wall or a cabinet. 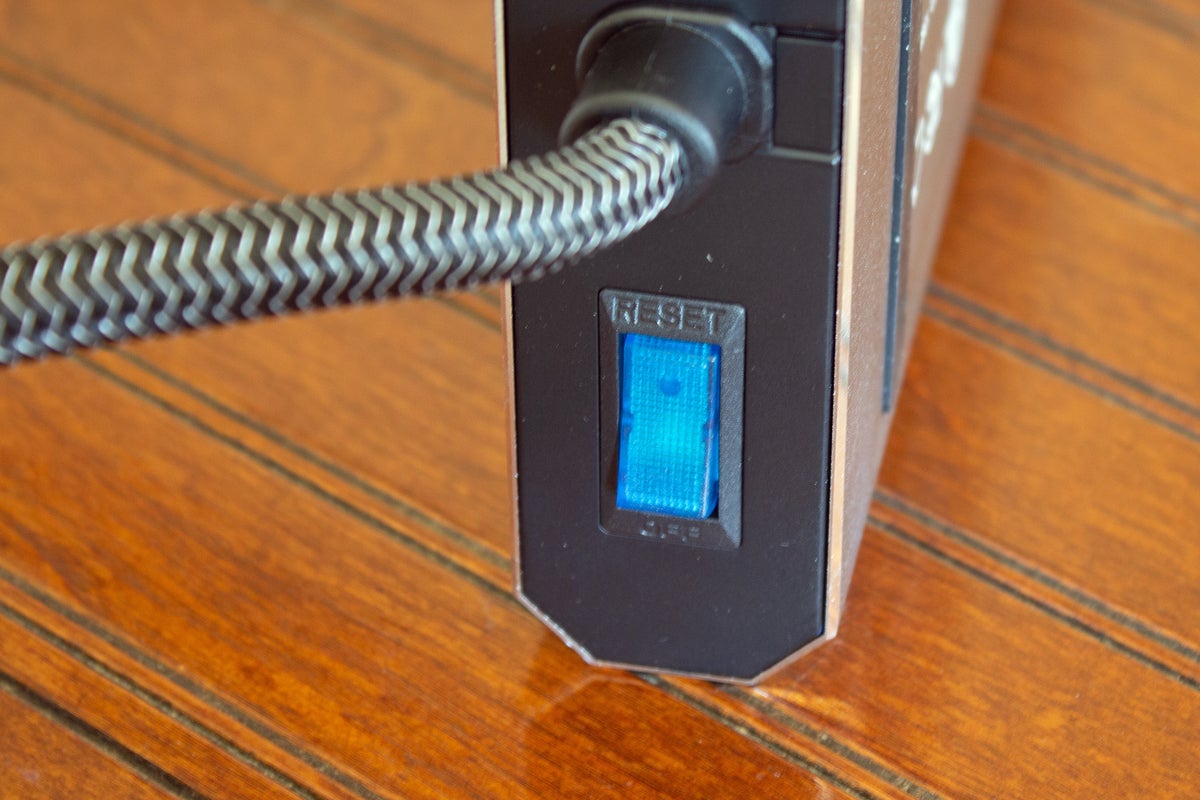 The master switch on the Austere VII Series 8-outlet surge protector is backlit by a blue LED. A onboard 15-amp circuit breaker offers additional protection.

The eight outlets on the Austere VII Series don’t offer any fancy features. They don’t rotate or pivot, and they’re not even staggered or otherwise asymmetrically oriented. Despite this seemingly ordinary design, I had no problem plugging in a broad variety of wall warts and oversized power plugs, as you can see from the photo below. This was a pleasant surprise. What you won’t get from this surge protector is protection for telephone, coaxial, or ethernet pass-through connections. But we don’t consider those features to be worth paying for anyway. 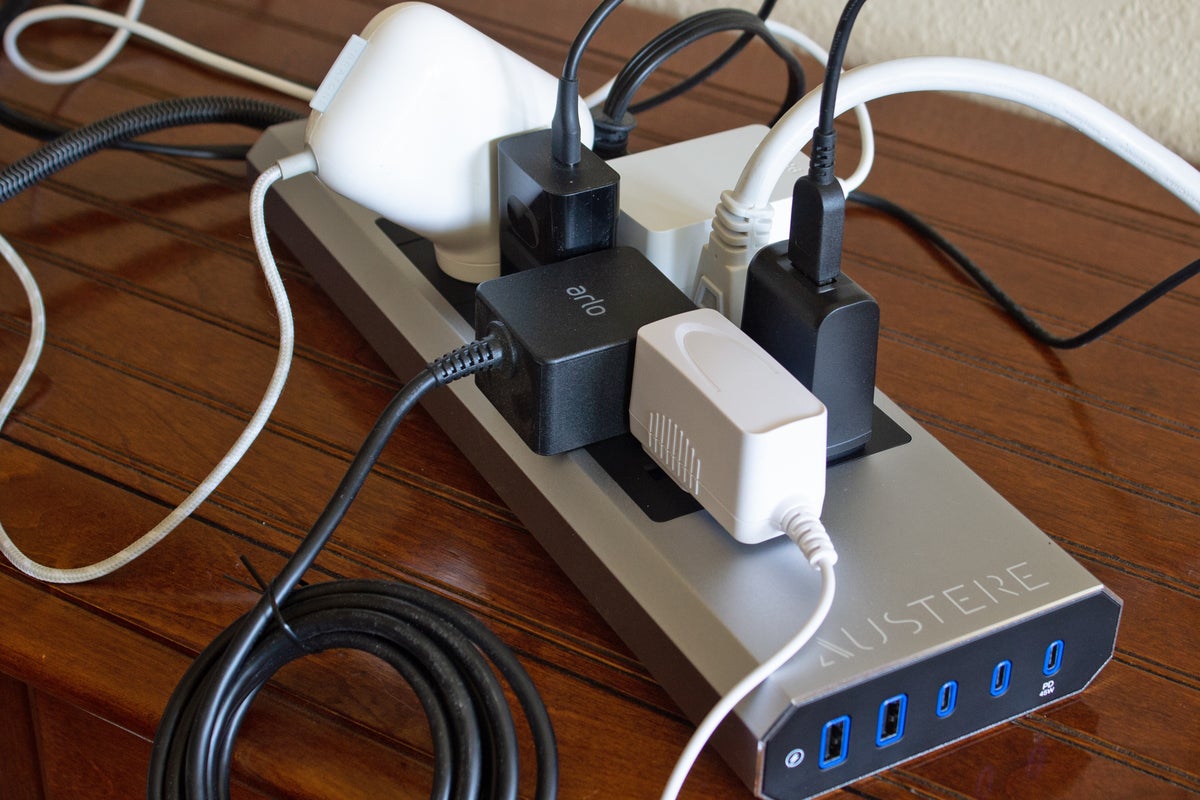 Despite the seemingly conventional layout of its outlets, I had no problem fitting a variety of oddly shaped power adapters and oversized plugs into it.

Ultimately, the answer lies in the eye of the beholder. The aluminum-clad Austere Series VII is an elegant-looking piece of equipment, where the plasticky Belkin BP112230-08 looks vaguely insectoid. Both surge protectors are relatively similar in their ability to withstand power surges; but ultimately, neither will look like a piece of art once it’s delivering power to a bunch of clients.

Sure, the Austere VII Series offers USB charging ports where the Belkin doesn’t, but is that feature worth $160? Personally, I’d find it difficult to part with $200 to buy any surge protector, but I’d also never look askance at a reader smitten with the Austere VII Series. It’s awfully pretty, and it’s highly capable.